The Minor Patch and Cash Shop Update has been concluded and all channels are fully accessible as of 1358hrs (GMT+8), including the channels that were planned for additional upkeeping maintenance works.

A Minor Patch has been included today which will update your game clients to v218.4. 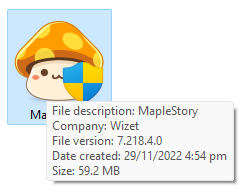 You are advised to use the Auto Patcher by running your MapleStory client normally.

Alternatively, you may obtain the Minor Patch file here.
Upon downloading the .exe file, paste and overwrite it into your existing MapleStorySEA game client folder.


As announced on 29 November 2022, Extreme Sports: Judge of the Sky minigame will be closed after the Minor Patch.
The compensation details are listed below.

Part A - Regarding Extreme Sports: Judge of the Sky Rewards
All Maplers will be able to receive the following rewards as long as the Ignition Fireworks Festival start quest has been completed.