The Server Check has been concluded and all channels have been fully accessible as of 1346hrs (GMT+8).

A Minor Patch has been included today which will update your game clients to v212.2. 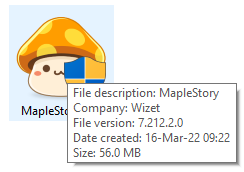 You may obtain the Minor Patch file here.
Upon downloading the .exe file, paste and overwrite it into your existing MapleStorySEA game client folder.

The Server Check has been extended until further notice while we continue to rectify issues that was encountered during our internal testing.

We apologize for the inconvenience.

The Server Check has been extended by 30 minutes as we attempt to rectify an unforeseen issue that was encountered during our internal testing.

We apologize for the inconvenience.


Dear Maplers,
Please be informed that there will be a Server Check & Cash Shop Update on 16th March 2022 from 0900hrs to 1300hrs (GMT +8).
There will also be a Minor Patch to address a number of reported in-game issues.
Game services for all worlds will not be available during the stipulated timing. Kindly log out before this period of time to avoid disruptions to your gameplay.