The Server Check has been concluded and all channels are fully accessible as of 1057hrs (GMT+8).

A Minor Patch has been included today which will update your game clients to v208.3. 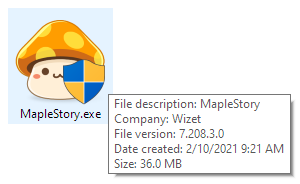 You may obtain the Minor Patch file here. Upon downloading the .exe file, paste and overwrite it into your existing MapleStorySEA game client folder.

Due to having 2 consecutive Minor Patches directly following the long server patch update this week, the Bebe's Green Box has been replaced with the following:

Everyone above Lv. 33 who logs into the game between 2nd October 2021 (after the minor patch is completed) to 3rd October 2021, 2359hrs (GMT+8), will be able to redeem the above-mentioned items from the Reward Box system in-game. Rewards can only obtained once per Maple ID.

We would like to take this opportunity to thank everyone for their patience and understanding while we continue to work other kinks that are present in the new patch.


Dear Maplers,
Please be informed that there will be another Minor Patch (v208.3) on 2nd October 2021 from 0900hrs to 1100hrs (GMT +8) to address more issues that were reported in by players.
Game services for all worlds will not be available during the stipulated timing. Kindly log out before this period of time to avoid disruptions to your gameplay.

Reported issues that we will attempt to fix:-
- MapleSEA Administrator