We would like to announce that all Maplers who opened the RED Weapon Order 90% Box which was given out during the Hot Time Event on 14th June 2014, 1730hrs (+8 GMT) but did not get any 2-Handed Scroll for their class will be reimbursed with another box.

We have found that the box was indeed faulty, and as such, the 2-Handed scrolls were not available from the box. The admins and developers have agreed to compensate all players affected by this issue (terms and conditions apply, see below). All eligible players will be able to receive the new box which will be credited via the Reward System. 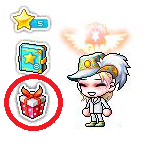 Affected players eligible for the compensation will be as follows: